Labour’s ‘People’s Vote’ policy on Brexit was the principal reason for the catastrophic General Election result. This was the main difference between the 2017 and 2019 manifestos and was key to Labour losing MPs in ‘Leave’ seats such as Sedgefield, Bishop Auckland, North West Durham, Barrow and Furness, Workington, Stoke-on-Trent (Central and North) and Newcastle-under-Lyme.

These are all seats where I have organised Stand up for Labour shows and it was very sad to see that the hard work put in by local activists was to no avail.

However, the Brexit policy was not the only reason for Labour’s defeat.

Polls taken since the election have shown that our poor performance had much to do with the unpopularity of our leader. The cause of this was undoubtedly a daily barrage of negative media that has been bolstered by Labour MPs disloyal to Jeremy Corbyn since 2015.

But Jeremy Corbyn is not unique in being an unpopular Labour leader.

With the exception of Tony Blair, ALL Labour leaders standing in General Elections since the 1970s have faced a biased media. James Callaghan was quoted out of context about the Winter of Discontent (‘What crisis?’); Michael Foot was ridiculed for his appearance and his age; Neil Kinnock was dubbed a ‘Welsh Windbag’ and photoshopped into a lightbulb; the media tore apart Gordon Brown for his appearance (especially his fake smile); and Ed Miliband was painted as a soft touch (despite his ‘tough’ protestations) who couldn’t eat a bacon sandwich.

So it was no surprise that after Jeremy Corbyn was elected Labour leader, he was ridiculed for the way he dressed and for having an allotment and, more seriously, was accused of being a ‘terrorist sympathiser’ and a ‘racist’.

Some post-election commentary has suggested that Jeremy Corbyn should have handled the media better, or that there should have been a stronger ‘rebuttal unit’. I don’t believe this would have made any difference at all. No Socialist leader is going to receive a fair press.

There will always be negative media about any Labour leader who sets out a radical programme.

Now that Jeremy Corbyn has decided to stand down, we are seeing new leadership candidates come forward and people are suggesting that a new leader will be the answer. There have also been suggestions that tweaking or dropping policies (ie conforming to the media’s preferred policy positions in some way) will turn things around. This is wishful thinking. Just look at what happened in 2015.

The only way Labour will not struggle with the media is if the leader and the party go to bed with Rupert Murdoch and other billionaire media moguls. This is what set Tony Blair apart from the other leaders. And it really is a revolting thought.

So, we have to accept that we cannot rely on the media to provide fair coverage of the Labour Party.

Does this mean that the political system is rigged?

It certainly supports the status quo, but this shouldn’t mean that we give up or that we cannot work constructively towards a fair society where people look out for each other.

So how can we fight for our communities when we are not in government?

Before and during the election campaign, much was said of the strength of our grassroots and our membership. It certainly was heartwarming to see hundreds and hundreds of people out canvassing in Putney, or Chingford, or Kensington. However this was mostly around the election period and the general public are rightly cynical about people knocking on their door a week or two before a vote.

Between 2015 and 2019, Labour did not do nearly enough to harness a grassroots movement.

The fact we have the largest membership of any party in western Europe has often been repeated but the reality is that most of these members are not active – and most only joined to vote in the leadership elections of 2015 and 2016.

And although we do have more members that other parties, we still don’t have enough. We really should have at least one million members. This is not even 2% of the population.

To reach one million members and to increase activism, we need a new vision of how what our grassroots does and what membership can offer.

A fundamental change needs to be made to the party’s financial structure.

We need to move our party’s focus away from the headquarters in London and need to properly fund local CLPs.

Local parties could be pivotal to local people and local community groups and campaigns but they simply can’t achieve this if they have no money.

There is no point employing Community Organisers if the groundforce has nothing to offer in resources.

At the moment many CLPs cannot afford to send delegates to the party conference and I have heard that there are branch meetings where members have to pay to take part (for a business meeting!). During the General Election, Stand up for Labour, Grace Petrie and Atilla the Stockbroker worked hard to plug the gap in local party finances but this is never going to be enough.

The graph below shows just how ludicrous Labour’s financial structure is. 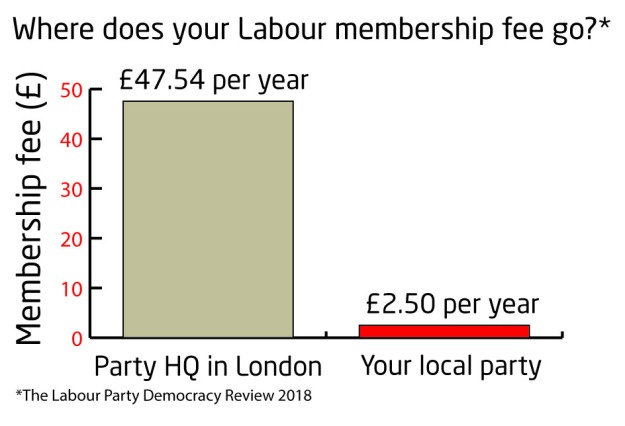 We need to balance out the amount allocated to CLPs and to head office so it is a 50:50 split. This is not only something that would be of benefit to local communities but it is the most just way to distribute membership subs. Almost all party activity is made at a local level so it is only right that local parties receive their fair share.

This would mean that each CLP would receive £25 for each member paying the full membership fee. A CLP with 1,000 members would, for example, receive up to £25,000 per year.

With this amount of money, local parties would be able to start thinking creatively about how they can support people in their boroughs, towns and villages.

CLP meetings would no longer be dull or acrimonious, but would be buzzing with positive ideas about what members can do practically.

With money behind them, CLPs could set up hubs that would be a centre of support for local people. These could also be run with the support of local trade union branches.

Foodbanks could be given a space, meals could be offered to the homeless, coffee mornings could be provided for isolated, older people and legal advice given to people struggling with debt.

Recovery groups could be given a cheap place to hold meetings; play groups could be set up for parents who want to get out with their pre-school children and meet up with other sleep deprived mums and dads. Yoga groups, meditation groups, the list goes on.

And the social side of the party could be buzzing as CLPs would be able to hire venues and put on gigs, comedy nights, film nights and theatre productions. These shows could also generate a revenue of their own and offer more money for promotion via social media platforms.

To back these CLP initiatives, the national party could provide a networking platform. With this, CLPs could be twinned so that a CLP with a large membership (many London CLPs have over 2,000 members) would be able to help another CLP that needs support (I heard of a CLP in Derbyshire with under 500 members). This networking platform would give members all over the country information about where to go when they visit other CLPs as well as recommendations about where to stay, or even which tradesmen are recommended in a particular area.

All of these initiatives would make Labour a very attractive club to join. And would, in turn, generate more revenue from membership subscriptions. Local parties would be very keen to recruit more people as they would benefit with £25 per person who signs up.

With this new financial structure, the Labour Party would be able to extol the virtues of Socialism in practical ways and not just through pious speeches.

I’m certain this will bear fruit in future elections and, with steady progress, we could become the dominant party for decades to come.

To achieve this, all we would need is an amendment to the Labour Party constitution, setting out that CLPs receive 50% of all membership subscriptions.

The central party in London and regional offices could find that they lose no revenue at all if we double the number of members and, in the interim, they would still receive union affiliation money and be able to crowdfund from emails to all members across the country (as was done so successfully during the General Election campaign).

I am in the process of drawing up a model motion that can be put forward at this year’s Labour Party conference.

If you think that the proposal to change the Labour Party into a dynamic, grassroots organisation is worthwhile pursuing, please get in touch and I will send you the model motion so you can put it forward at your next CLP meeting.

6 thoughts on “Here’s how we win again” 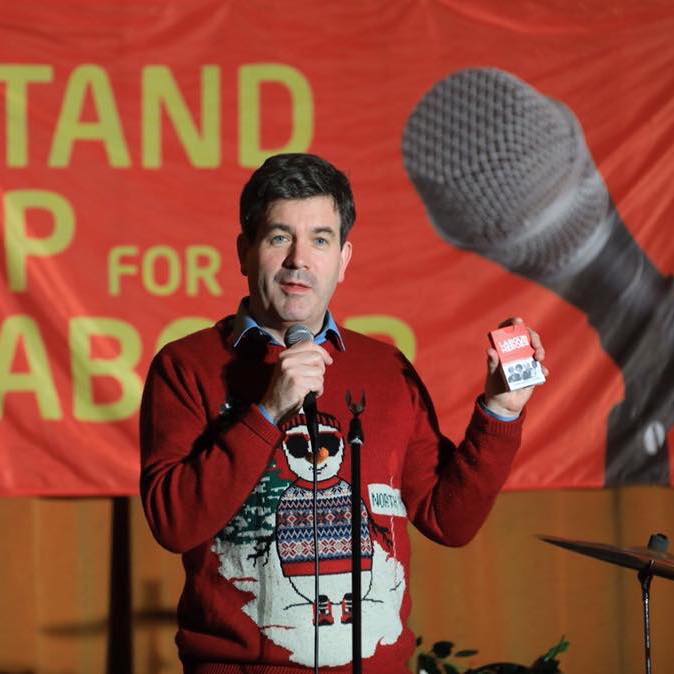